fAter the short program which saw her in 3rd place, after Maiia Khromykh and Loena Hendrickx, second and first place respectively, Anna Shcherbakova returned to her leading position to take her third ISU Grand Prix gold medal in Turin.

Maiia Khromykh of Russia claimed the silver medal in her debut at the ISU Grand Prix while Belgium’s Loena Hendrickx earned the bronze, the first ISU Grand Prix medal for a woman from her country.

Performing to “Ruska”, “The Master and Margarita” and “Lacrimosa”, Shcherbakova delivered, hitting a quad flip right out of the gate and following up with seven triple jumps including the triple Lutz-triple loop combination that had eluded her in the Short Program. The 2021 ISU World Champion set a new personal best score in the Free Skating with 165.05 points and totaled 236.78 points overall.

“My main goal for this competition was to show that my quad is back and I reached that goal. I made some mistakes in the short program and I will work on it. The short program has to be clean every time, but am happy and satisfied with my performance today,” the 17-year-old commented.

Khromykh landed a quad toe-double toe, another quad toe and five triples in her routine to “Moulin Rouge”. Her only error came when she stumbled on an underroated triple loop. The ISU World Junior Championships competitor improved her personal best by 20 points with 154.31 points and accumulated 226.35 points.

“I am satisfied, and at the same time I am not. I made an error on the loop and the footwork was not so good. But I am very happy with my second place in my very first (senior) Grand Prix, so yes, Maiia can do it,” the Muscovite said.

Overnight leader Hendrickx turned in another excellent performance to a mix of Oriental music that included six triple jumps and difficult spins. The Belgian Champion achieved a personal best as well with 145.53 points and 219.05 points overall.

“I was very emotional when I saw I became third, it’s a dream that came true,” said Hendrickx, who celebrated her 22nd birthday on Friday. “I worked hard for that and I had to overcome many setbacks. I am very proud to be the first Belgian woman to get a Grand Prix medal,” she added.

The two Italian girls in the race, Lucrezia Beccari and Lara Naki Gutmann, did not go well, both with programs not in line with the a Grand Prix level. However, it must also be said that this third event in the Grand Prix was not to be held in Italy and for this reason they had little time to adapt their program to a competition of this level. Nicole Schott, who we will see again in the Tokyo race next week, totals 167.20 and closes in tenth position. The German, aged 25, had to perform two combinations but the attempt was unsuccessful. Sofia Samodurova, from Mishin’s school, made a mistake on the triple flip with a still good program (180.59 points).

Yi Zhu, who yesterday obtained her personal best scores with the short program, is an excellent skater with an ambitious program but with many difficulties and many elements performed with uncertainty (171.25). 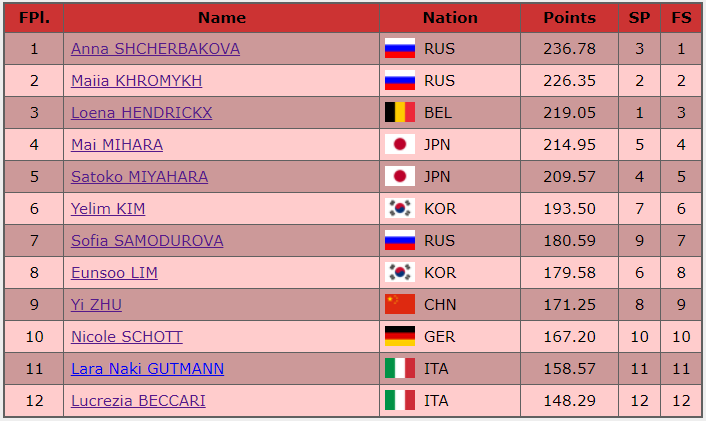