The 2018 Four Continents Champion Kaori Sakamoto of Japan captured the Women’s Short Program at the ISU Grand Prix NHK Trophy in Tokyo on the first day. Teammate Mana Kawabe was the surprise of the day coming second ahead of Korea’s 2020 Youth Olympic Games Champion Young You.

Skating to “Now We Are Free” from “Gladiator”, Sakamoto nailed a triple Lutz, double Axel, triple flip-triple toe and got a level four for her three spins. The 2020 NHK Trophy Champion scored a season’s best with 76.56 points to take the lead.

“I was able to skate very cleanly and I was actually very calm throughout,” Sakamoto said. “I was quite nervous and felt like I wasn’t well grounded, but during the six minutes (warm up) I was able to get my usual jumps back and I was able to realize that I was back to my normal self”, she said.

Kawabe landed the only triple Axel in the Women’s event and followed up with an excellent triple Lutz-triple toe and a triple flip in her routine to “Shadow 5” and “Winter 1”, an adaption of Vivaldi’s Four Seasons. The 17-year-old posted a personal best score of 73.88 points.

“My goal was to get 70 points, and I was expecting a score in the low 60s. I was happy and surprised that my score came out better than I expected,” Kawabe commented. “I was able to do a good one (triple Axel) in the six minute warm up, so I was confident. I was very relieved after I landed it”, Kawabe commented.

You crashed on her opening triple Axel but rallied to land a triple Lutz-triple toe and triple flip in her program to “Whirling Winds” from the “Leftovers” soundtrack by Ludovico Einaudi. She earned 68.08 points.

“I am very disappointed in my triple Axel today,” the 2021 Skate America bronze medalist commented. “I did OK on the other stuff, but I had a wobble in my step sequence and in my ending pose, probably because I was nervous”, You concluded.

Rino MATSUIKE (JPN) started well and perfomred a good combination triple lutz and triple toeloop. Some difficulties in the step sequence and in the final spin. She got 63.34 points ranking 7.

Characterized by a great energy, Alysa Liu (USA) is not far behind in fourth place at 67.72 points. She missed her triple Axel. Eunsoo Lim (KOR) finished fifth (65.23 points), failing the jump combination, while Amber Glenn (USA), who almost fell on her triple Axel attempt, rounds off the top six (63.43 points). Amber performed a superb triple rittberger.

Skate America silver medalist Daria Usacheva (RUS) has withdrawn from the event following a bad fall in the warm up. 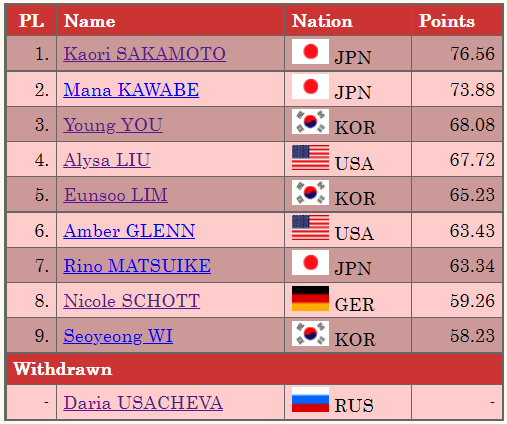 Japanese one-two at the NH Trophy. Sakamoto wins easily the gold medal, followed by Kawabe and You Name and Name silver and bronze

Today ISU has released an official statement on the Ukrainian crisis, after IOC Statement of February 28 (below article), regarding...

The Tutberidze method and the secret school Sambo 70

Valieva off the podium, a heart-pounding Olympic final